Asolo Prosecco. The Pearl. The City of A Thousand Horizons.

When a trend is hot, whether a chart-topping song, a blockbuster movie or a destination Instagrammed repeatedly its got to be good. This time it is Prosecco that is on fire! It recently made headlines for being the Number One Sparkling in the world. A swift one-two punch to Champagne. To the tune of approximately 600 million bottles in 2018.
Why this fast pace change for a lesser-known sparkling? Part of it is the cost. Prosecco, very good Prosecco can set you back between $30 and $45. But the average price of Prosecco is between $10 and $20. Not bad for a beautiful bottle of sparkling wine.

The Grape of Asolo

95% of Prosecco today goes through two fermentations. The process usually takes place in large stainless steel tanks. Those offer a cleaner more efficient process for fermentation. Letting the flavors and aromas stand out without hindrance.
The varietal of Asolo is Glera. It is the key grape used in the production of Asolo Prosecco. The Friulian synonym for Glera is Prosecco. The word, Prosecco, used with abandon since the 18th century has a complicated history. Particularly when you’re talking ampelography (identifying and classifying grapevines). In the past, they would use the word Prosecco for a sparkling wine made with different grape varieties, whose main component was Glera called also Prosecco (both Lunga and Tonda) along with Perera, Verdiso, Bianchetta. Because of the attention, Prosecco has received it is now a protected name reserved for solely for Asolo Prosecco Superiore DOCG, and Prosecco Conegliano Valdobbiadene Superiore DOCG.  Prosecco produced under the DOC designation is only allowed in nine provinces of Fruili, Venezia Giulia, and Veneto.
The Glera grapes are grown on the vast expanses of hills in Asolo. Harvest is tedious here. Due to the hilly region handpicking grapes is the only option.
Glera is an aromatic grape. Location matters! When Glera is grown in flat vineyards it loses its character. It thrives in locations that are on south-facing slopes with the fruit yield well controlled. Then the wine has balance and structure. The wines are supple, light and do well to produce an intriguing Sparkling. The beauty of the grapes is in the aroma, most often revealing scents of pear, citrus, and white flowers.

Change for Prosecco was in the Air

2009 was the year of change for Prosecco. The goal was to ensure the unparalleled quality of the wine. Under strict Italian law, the DOCG is the highest designations of quality wine. Just 25% of all Prosecco produced will be labeled DOCG. Before 2009 the wine produced was IGT (I.G.T. or Indicazione Geografica Tipica) or DOC (Denominazione di Origine Controllata). These two designations are below the DOCG quality level. Conegliano Valdobbiadene is the only other beneficiary of the elevated DOCG designation Prosecco.  Asolo even in its tiny size is well known for its role in the world of Prosecco. The wines here run the rank of Asolo Prosecco Superiore DOCG. Comparable to the Grand Cru designation in France.  Asolo has 94 producers in its region. The DOC’s and DOCG’s are the highest level of quality wine in Italy.  To qualify there are significant checks and balances producers must go through and standards they must meet.

Prosecco comes in both sweet and dry but is first categorized by its perlage or effervescence.   Spumante (Sparkling), Frizzante (Semi-Sparkling), and of course, Tranquilo which is the Still Version. There is also the question of sweetness… Not all Spumantes are sweet. Many are dry. Sweetness is categorized by the level of residual sugar a Prosecco has.  So from dry to sweet, it goes as follows, extra brut, 0 – 6 gr/l sugar;
brut, below 12 gr/l sugar;  extra dry, 12 – 17 gr/l sugar; dry, 17 – 32 gr/l sugar. Prosecco above above 32 gr/l of sugar, is forbidden for Prosecco.

Glera is also the synonym for Prosecco in Friuli, became the name for the grape varietal. Treviso the Province Asolo is located in has a lengthy history with Prosecco wine. They’ve been producing Prosecco here since the 19th century. Treviso is also responsible for 90% of all Prosecco production.

The Town of Asolo

Surrounded by medieval charm and history, this laid back town is full of comfortable cafes, wine bars, and great restaurants.  The surrounding hills cradle the vineyards around it. Sweeping views are around every corner if you know where to look. Rich in art, culture, and history, it holds intrigue for all. And then, of course, there is the wine. Today a region worth celebrating. Not only for its rich wine history but the impact it has on today’s markets around the world.

Asolo is located in the northeastern position of Italy’s Treviso region. One of seven provinces in Veneto, each unique and stunning in its own right. Asolo has long been an evocative city. The history and architecture, breathtaking and fascinating. The people, among some of the friendliest around. This enticing stretch of Asolo is a mere hour and 20 minutes drive from the capital city of Venice. 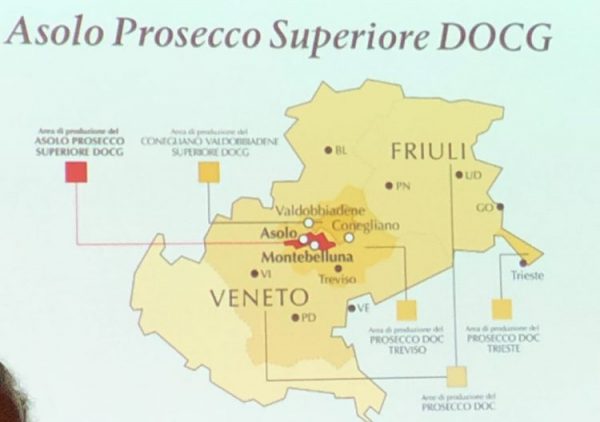 Turn the clock back for a moment to the Medieval Ages in Asolo to discover a remarkable town and wine region. Known as the “City of One Hundred Horizons”, Asolo was home to the Veneti (Venetians).  Owned by feudal lords and the noble family Ezzelino.  The family gained notoriety in later years as one of the heirs was quite tyrannical. His name? Ezzelino III da Romano. As a nobleman and a soldier, he had advantages that eluded his peers.

His father gifted him Trevignano (a commune in Rome) in 1223. As he grew in his role as a soldier he became a masterful commander. He also had an insatiable appetite for expansion and seized Verona in 1225. His reputation as a tyrant sealed his inclusion in Dante’s Inferno. It wouldn’t be until 1242 that he arrived in Asolo. His power was far-reaching.  He had the dubious distinction of being embraced by a Pope and excommunicated by another.
He lived in what was later to be Queen Caterina Cornaro’s castle. A 10th-century structure that became one with the city walls in 1439.

Imagine you are a woman in the late 1400s. Your name is Caterina Cornaro, a Venetian noblewoman. Your hand was taken by a complex and power-hungry King. A King of Cyprus. He chooses you because of the allegiances and protection your family provided. Caterina, herself would provide protection to Cyprus in this marriage. She found herself the wife of James II, the King of Cyprus, in 1473.
In those days keeping a marriage together was hard, but hanging on to the lives of male noblemen even more precarious. She became pregnant and before she gave birth, her husband died. Was he poisoned? Suspicion reared its ugly head towards her Venetian relatives. Not long after that, her young son who was the final legitimate heir to Cyprus perished as well.
She ruled Cyprus for 16 years as Queen Regnant. Enter the Venetians who have coveted this land the length of the Medieval period. Pressure came from all sides and an offer. Without a husband or an heir, she was but a pawn for the land-hungry Venetians. Their goal was to rule the seas. An offer of a fiefdom of most beautiful land in exchange for her island of Cypress. Her back against the wall. She gave up the island of Cyprus and abdicated her throne.

Her Venetian countrymen would rule the Mediterranean with this strategic position.  Unimaginable circumstances yet the life of a noblewoman in the late middle ages. Caterina Cornaro would move in 1489 and extensive restoration of the castle would begin. Caterina looked after Asolo for years. She lost her castle to the Imperialist Army and left Asolo for the last time. She died in Venice in 1510.
The castle has morphed over the years. The walls once protecting the city have come down. The castle’s clock tower remains a powerful remembrance of Asolo history.  It’s visible today from every corner of the town.
Rich history is one aspect of the beauty of Asolo. The other is the people it attracted and what they did to make Asolo even more memorable than it already was. These are some of the cornerstones of history in this land of Prosecco. 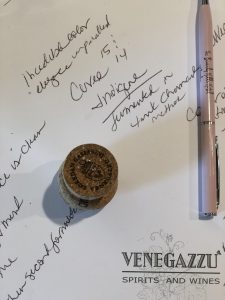 Ida Agnoletti Winery
Producing both sparkling and still wines, and a native variety Recantina. Not only is this winery woman-owned but Ida Agnoletti is a renegade of sorts. She marches to the beat of her own drum and has an incredibly clear vision of the type of wine she wants to make. I tasted every single one of her wines and found them all outstanding. When I return to Asolo I will beeline to her tasting room! Highly recommend all of her wines!
Address: Via Pietro Andrea Saccardo, 55 31040, Selva, TV, Italy 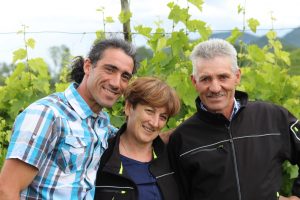 Pat del Colmel   Dramatic hillside vineyards. Next to the mountains.  Lush vegetation. Sit out on the patio and take in the views while you sip their lovely Prosecco.
Address: Via Costeselle, 5, 31030 Castelcucco TV, Italy
Tenuta Baron Winery is a large estate with magnificent views highlights.  Producing both sparkling and still wines. Beautiful tasting room. Delightful wine and historic cellar. The grounds are phenomenal. You can see the city of 1,000 horizons from their vineyards.
Address: Via San Pio X, 17 31010 Fonte (TV) Italia 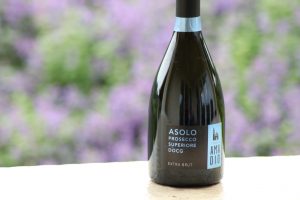 Tenuta Amadio
Run by a brother and sister team who came together to save their families property and build a next-generation winery. Breathtaking views, stunning vineyards on rolling hills. Stunning tasting room.
Address: Via Longon, 74, 31010 Monfumo TV, Italy
Villa Di Masar Not only is this property a UNESCO Heritage Site, but it was also built by the famous architect Palladian.  It is a must-visit destination.  More on this in an upcoming video. Stay tuned.
Address: Via Cornuda, 7, 31010 Maser TV, Italy 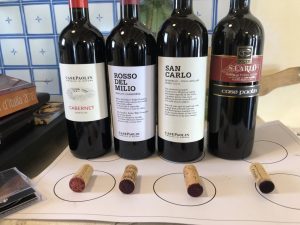