“My main focus here is Atelier Melka. What we do is make great wines and truly enjoy this valley.”

That brand is Brilliant Mistake, which produces a riveting small lot, ultra premium Cabernet Sauvignon. Stacy & John Reinert rely on their consulting winemaker, Maayan Koschitzky heavily to produce their Napa Valley brand.   So I am heading up Napa Valley to the quaint and somewhat subdued town of St. Helena. Koschitzky’s been in the valley for a little over five years and his impact has definitely been felt. First at Screaming Eagle, and the last three years at Atelier Phillipe Melka. He also has a number of clients he consults for.

“Napa Valley is an amazing place. There’s a lot of diversity in a very small valley.” 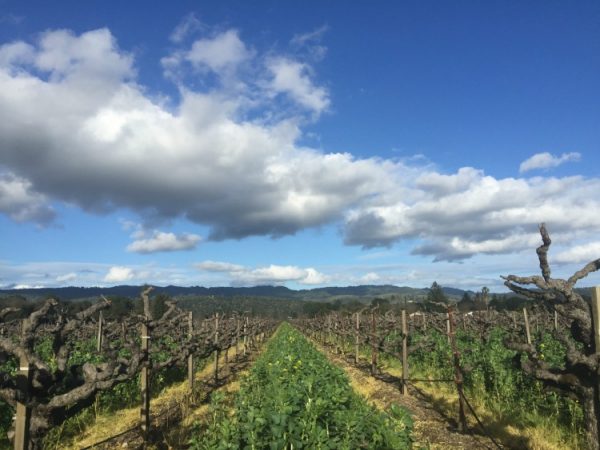 Koschitzky wasn’t always going to be a winemaker.  He comes from a family of farmers growing fruits and vegetables.  Born and raised in Israel, he went to school and studied engineering.  Disheartened by the prospect of sitting at the computer all day he longed for the outdoors. Returning to farming would solve that problem.  The correlation between engineering and winemaking was evident to Koschitzky. Engineering gave him the experience he needed working with machinery.  Wineries required machinery to do the heavy lifting.  Machinery use is pervasive in the wine industry.  It’s used for harvest, crush, fermentation, aging, and packaging. A change to winemaking would enable him to leverage his creative abilities and his technical skills while embracing his love for farming. The vineyards would prove to be key grounds to learn from and enable him to expand his knowledge base growing vines.  He made the switch in 2005 to winemaking.

“The truth is, Napa Valley is a very expensive place to make wine.”

Israel entered the grape growing realm with vineyards planted in the late 1800s by Baron Edmond de Rothschild.  The wineries started by making Kosher wine and tended to be sweet and the mono dimensional. Today, with over 20,000 acres and state-of-the-art irrigation which was created by Israeli farmers and engineers they have already learned a great deal about working in arid and climates with little water.  The Israeli’s are the inventors of drip irrigation, a technology that has revolutionized vineyard farming and is widely used in California.  Thriving in this area are many of the grapes popular in Napa Valley, which would one day become home to Koschitzky.

In 2008 Koschitzky went to work for a mentor who would help change his trajectory.  Dr. Yair Margalit was interested in winemaking as a visiting research professor at U.C. Davis. He was later instrumental in creating Israel’s first serious boutique winery.  The Margalit Winery creates some of the best reds in Israel, from Bordeaux blends (Merlot, Petit Verdot, and Malbec) including Cabernet Sauvignon & Cabernet Franc.   It was a perfect training ground for Koschitzky who remained with Margalit for three years.

“Napa is the World of Cabernet Sauvignon”

Pondering the possibility of Napa Valley, he first discussed a move with his wife.  Shortly after, a friend returned to Israel from Napa Valley the stage was set.  He and his family would head to Napa for Harvest and to expand his wine education at U.C. Davis.  In 2011 he applied for several internships in The Valley.   The first call back was for an interview with none other than Screaming Eagle. One of the several revered cult wines in “The Valley”.  Koschitzky was unfamiliar with the brand at the time. The brand wields Bottles of this cult wine range from $1995.00 to $2450.00 if you’re not in the wine club.  If you want to get into the Screaming Eagle wine club the waitlist is approximately 15 years.  The magic in the bottle as I’ve heard is ethereal.

He flew in for the interview and after it was over returned to his wife and told her “Let’s do this!”.  Taking a step back as an intern, gave him a unique perspective having already been a winemaker.  He learned the ropes at Screaming Eagle’s state of the art winery. The winery was completed just before Koschitzky joined the 2011 Harvest.  The philosophy of Screaming Eagle would change how Koschitzky thought about winemaking.  The philosophy was unique. No expense spared, the best vineyard, and only exceptional fruit makes the cut.

Maayan Koschitzky is the director of winemaking at Atelier Phillipe Melka (a wine consulting venture) and Melka Wines.  Atelier Melka is responsible for creating wine for close to 20 clients, with renowned winemaker & entrepreneur Phillipe Melka.  Koschitzky says Melka is an authentic artist who loves what he does.  With 25 years in the game, Melka and his wife Cherie launch their own state of the art winery on the Silverado Trail. They will celebrate the opening with the first harvest of the year.

“I’m trying to make a wine that is a winemaker’s wine. I’m not looking for high price points, but a fun, fresh wine. A more approachable, day to day wine.”

Koschitzky provides clients with design and implementation services of wineries.  His next step is creating his own brand. He’s partnered with Silverado Farming Company to make his own line of wines called La Pelle (meaning shovel in French).  It’s coming full circle for him as he returns to his roots. He explains, “In our story, we went to that name and the brand (La Pelle) because that is who we are. On the farming side, we’re digging the soil and planting the vines.  Once the tank is dry and we are ready to go to the barrel, we drain the juice to the barrels. We dig the tank out with shovels. It felt like the right tool to close the cycle of the brand.” 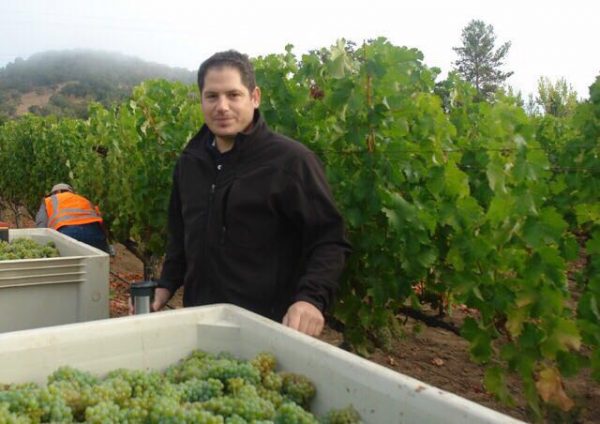 The first vintage for La Pelle will be bottled this year. A Sauvignon Blanc from old vines that have been dry-farmed in St. Helena.  “This year’s Sauvignon Blanc looks really fantastic. The flavors are excellent as is the yield,” says Koschitzky.  At the time of this post, the Chardonnay was just two weeks from harvest. The La Pelle Cabernet Sauvignon will be bottled in May of 2018. 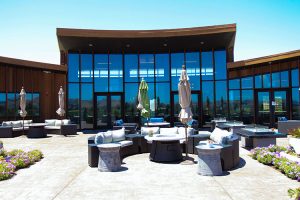 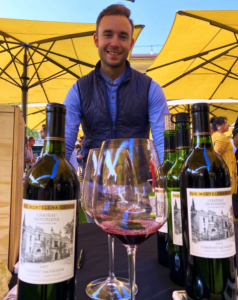 Sojourn to the apex of Napa Valley with Theorem Vineyards. Adventuring up to Calistoga offers a wide array of wine riches including some boutique & family-owned small lot wineries.

Decadent, delicious and luxurious. Chocolate made for pure indulgence and a very special offer for you. (Link in bio)

Picture this. When Chardonnay grapes are harvested and pressed for juice, the remains are a mix of nutrient-rich by-products which, to date, have been going to-at best, compost--at worst, to waste.

Winemakers focused on eliminating waste discovered the taste attributes of Chardonnay grapes work in symphony with dark chocolate. Specifically by adding both brightness and a natural sweetness which utterly complements and tempers the dark chocolate's bitter notes.

The results are incredible. Smooth taste, a decadent creaminess and flavor that is so remarkable you'll be coming back for more. Science endorses dark chocolate as a potent antioxidant.

Delightfully designed to be unique in the realm of chocolate, it stands alone in its ability to pair perfectly with wine.

Whether it's Valentine's Day with someone special, a night out with your favorite friends, or a relaxing afternoon, indulge! Vine to Bar will take you and your palate
to new heights. (Link in bio)

This Tuscan beauty is a lovely sip with a bounty of red vibrant fruit and an affordable price. Beautifully understated Sangiovese with all the best Sangio attributes.

Love the bright taste and the easy on the pocketbook price. $20

This is how you kick off the weekend!

What are you ‘getting into’ this weekend?!

A nose of violet, black fruit and red berries sets the tone for this luxurious sip.

Lovely soft tannins, a framework of good structure and balance render a sublime state for those enjoying it. And if you love a long decadent finish you are in for a treat.

Angele means messenger of God or Angel in French. To 💋🍷💋#TheWineSiren Angele means a beautiful sign of food, with French influence.

Their wine list has something for everyone. The location is on the Napa River which you know is a favorite viewpoint of mine. The waterfront patio seating is always warm and sheltered.

The food and cocktails are always appealing.

Whether you are a barfly and love a good brunch or looking for a high quality evening out, this is one of my favorite destinations.

I’ve had the luxury of dining on these stunning St. Edwards oysters and enjoying the evening with my lovely friend, @Teresa_

It’s the perfect place to catch up with old friends and new. Celebrating a special occasion or just catching up.

Opened in 2002 by Bettina Rouas, this is a destination to be added to your itinerary, seasoned Napa visitor or not.
@AngeleRestaurant
#TheWIneSiren ...

@Bistro.Jeanty is a beautiful family-owned restaurant in the heart of #Yountville.

Started by Phillipe Jeanty over 20 years ago, the adventurous menu along with the meticulously prepared food is always a great detour after wine tasting. The dish you see before you is Crême de Tomate en Croute (Tomato soup in puff pastry). It’s bold brilliant flavors are complimented by the flaky decadent crust. Perfect for a cool winter day in Napa Valley. Located in Yountville Bistro Jeanty has both indoor and outdoor seating.

Paired with this stunning dish, a beautifully made Chablis from Bourgogne’s Domaine Vincent Dampt. A perfect accompaniment with so many dishes. Lovely texture, vibrant, great balance and a refreshing finish! Vincent Dampt is a fourth generation winemaker who has worked in both Marlborough New Zealand and at one of my favorite wineries, @olivierleflaive in #Burgundy. He farms organically on 8 hectares and is in the process of getting his HVE Certification (High Environmental Value). Sustainably grown.

Dry Creek Valley has the charm of old Sonoma County, and at the same time the beauty of some of Sonoma’s best wine. @DutcherCrossing continually exemplifies the mastery achieved by proprietor Debra Mathy.

While we all are riding the cool weather wave, there is nothing like robust wine giving its all to a meal or to your pure and utter enjoyment. Dutcher Crossing has achieved this with three luscious examples of beauty.

Starting with the 2017 Brother’s Reserve Zinfandel… A complex and well balanced array of exquisite flavor and the hallmark of a brutal year. Lively and succulent, a vibrancy and complexity that will give this vintage beautiful cellar time, but make you want to imbibe now. A favorite pairing? A rack of lamb . The full bodied beauty stands up to rich dishes!

Next the 2017 Taylor Reserve Cabernet Sauvignon from Dry Creek Valley. Considered one of the most important wines at Dutcher Crossing the rock hillside the Cabernet Sauvignon vines thrive on brings rich flavor, aroma and tannins. Blended with Syrah, it adds further complexity and softens its rigidity with balance and beauty. Incredible finish and brilliantly vibrant fruit celebrates this exemplary beauty of a Cabernet. And you know I’m pairing that with a big juicy porterhouse!

Finally heading to sweet side of life with this 2014 Zinfandel Port. While it’s ready to sip now, this is one you can cellar and forget as the flavor will only further accentuate it’s promise. Ripe dried and sweet fruit with a bit of oak spice and a burst of vibrancy. I paired this with my tiramisu and couldn’t get enough.

It’s time to get closer to Dutcher Crossing and taste these incredibly exquisite and complex wine. Ready?! Let’s do this!

By Kelly Mitchell February 14, 2020 No Comments