The Hawaii Food & Wine Festival, the brainchild of Chefs Alan Wong and Roy Yamaguchi‘s kicks off this week. To choose the right wines for each event, event officials taste close to 12,000 bottles of wine. The tastings result in the best for pairing and tasting sessions.  After six successful years, this week marks the beginning of another exceptional event.  I recently sat down with the Master Sommelier, Roberto Viernes at the Kahala Resort. We discussed the wine, events and this one of a kind experience. 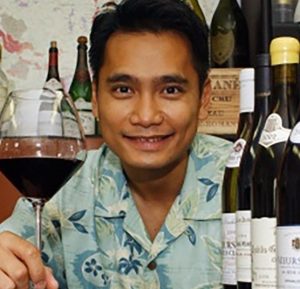 Viernes is one of just three Master Sommeliers of Filipino descent. He moved to Hawaii as an infant and has lived here ever since.  His talents are notable. He is humble and down to earth.  Viernes is an approachable master sommelier with palpable insights.  The most exciting event in his eyes for this occasion, the Rarities Tasting .  This event will highlight the most revered Cabernet Sauvignon region in the world, Bordeaux. These well-orchestrated wines will feature 1980 vintages from Angelus, Margaux, and Pavie. To cap off the event two excellent Rhones from 1989, Jaboulet La Chapelle and Chave Hermitage.  The event is open to just 50 attendees and promises to be memorable.

Listen in as we talk about some of Roberto’s favorite wines and his journey as a Master Sommelier & learn some of the featured wines in the Rarities Tasting event.

Master sommelier Roberto Viernes was born in the Philippines and migrated to Oahu, Hawai‘i at the tender age of fifteen months with his family.  After receiving his bachelor’s degree in French Language at the University of Hawai‘i at Manoa, he began his career in the hospitality industry as an aspiring chef. Roberto planned to use his love for food and French language skills to go to culinary school in France. However, while apprenticing under Chef Yves Menoret at Clicquo restaurant, Roberto took the introductory course for the court of Master Sommeliers in 1997 and has been hooked on wine ever since.  Roberto received the coveted title of master Sommelier in 2005 and is currently general manager for American Wine and Spirits. He travels extensively to classic wine growing regions around the world to gain an even better understanding of wine and is also active in teaching courses with the court of master sommeliers.