140 years ago, a man named Jacob Beringer left Germany, on a ship to America, landed in New York and found his way to Northern California and Napa Valley. He was an apprentice and a cellar master in Berlin. While it appears he was not in financial hardship at that moment, the confining situation in Germany with land and the ability to grow wine was not optimal. For him the choice to embark on this adventure, while not dire, was necessary. You see, he was the second son. Second son’s in the 1800’s were always second. Almost like an afterthought.

In their first year of winemaking they produced 40,000 gallons of wine.

Jacob did not let being a second son slow him from helping to make Beringer Vineyards one of the longest running wineries in Napa. He was fine standing out of the spotlight and happy to do his work in the shadow of his older brother, Frederick. Truth be told, they both were critical to the success of this venture. One with the money and the other making, creating and building. In their first year of winemaking they produced 40,000 gallons of wine. Just wrapping up his first year of winemaking for his namesake, Mark Beringer is fully engaged in the business of Beringer. Today I am meeting with him to discuss the 140 year anniversary, his winemaking life that brought him to this moment in time, and how his second year as Chief Winemaker for the brand is evolving. 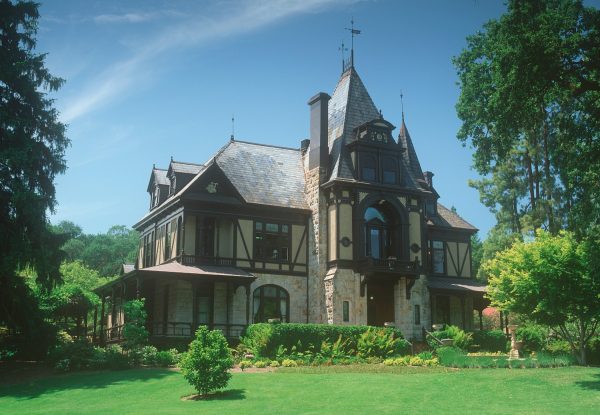 I pull into the driveway of the Beringer Estate and am first taken by the main house, known as the Rhine House. It is surrounded by trees rich with history of wine and story. The sprawling yard lies before the house, a grand tudor, a statement of wealth beyond my comprehension in the era it was built. The tudor itself was made for Jacob’s elder brother, Frederick, who was granted the family’s riches. The magnificent attention to detail, from the rich luster of the hand carved wood to the stain glass accents, the house was a veritable palace in those days. Jacob had a much smaller house, now known as the Hudson House. So many thoughts running through my head as I am struck by the situation of growing up a namesake but having little relationship to the brand representing said namesake. Later in a complete twist of fate, becoming the Chief Winemaker of said company reconnecting with your piece of history while building a foundation for a robust new era in winemaking.

It’s the kind of disposition you don’t expect from an heir to legendary history.

As Mark greets me, I am enthralled with his down to earth and friendly nature. It’s the kind of disposition you don’t expect from an heir to legendary history. We take a tour of the Rhine house, behind the ropes and up to the second floor. You get an idea of how his family lived so many years ago. No expense spared from the nursery to the master, and decorated with impeccable taste. Many of the rooms have been converted into a wine friendly state, either tasting rooms or meeting rooms, but you can still feel the presence of family members from years ago.

We move outside to where the wine production began, the barrel room. The barrels here are the original ones that Jacob worked with. I can feel the history exuding from them. There is a missing nameplate on one, which had been given to a woodworker when they were restoring the room in the ’70’s. Sadly it never made it back. Next to that barrel is the original press used to make wine, and a photo of Jacob and his brother. There shines the exact Beringer nameplate missing from so many years ago. Glancing up to the ceiling I marvel at the architecture of the day and ask about it. The wood above us was modeled after a ship’s hull. The goal, to be water tight, and it was. It was one of the first structures to use gravity to drive the wine from the top floors down into the barrels. The grapes would be delivered by horse and carriage in the back of the building and crushing would begin on the floors above. As the press ran, the wine would be directed into the giant barrels below reducing labor needs while increasing efficiency. The top floor is where the deliveries occurred. The second floor is the fermentation room leading to the bottom floor which was storage. It’s fascinating to hear how early the Beringer Family used these techniques. This was state of the art wine making 140 years ago.

I ask Mark about his interests when he was younger, taking him back to high school to get a handle on his journey. His love for music in those days, specifically the trumpet, made him scholarship-eligible to play the in the symphony at Cal State. Symphony did not resonate at the time because he was a jazz guy. This combined with the finality of the selection hit him. He did what any young man would do when faced with a decision of this magnitude. He balked. Instead his journey into wine began with a stint at Santa Rosa Jr. College. With a few electives left over, he took a couple of viticulture class and was hooked. He built his background in viticulture and transferred later to Fresno State where he got a degree in enology and a minor in chemistry. Later he worked at Raymond Vineyards with his uncle & the winery namesake, Roy Raymond Sr., and his cousins. This work would carry him and his knowledge from 1985 – 1990. He was working there whenever he could, weekends, summers, from harvest to crush to bottling. It was a path that took him away from Beringer, which was now owned by Nestle. Rather than looking back to the corporate world where his namesake was now owned, he looked for work wherever he could.

He found his way back home.

He attended school with several of the Duckhorn kids and his roommate at Fresno State, Alex Ryan (the current president). In 1992 he took a job at Duckhorn. It was a 15 year adventure. The wonder years. Some of the best wines and new brands were created during this time including Paraduxx, Decoy and Migration. In 2006 he began consulting, then did a brief stint as a GM, neither of which held the allure that winemaking did.

“I felt, I finally had the resumé to walk in the doors and do this”

While it wasn’t his goal to return to Beringer (where he stocked shelves in high school) he asked around and the more he talked to the insiders, the more he learned. Beringer was still very much a corporation, and held a unique place in the winemaking. With over 140 years in the business, being owned by two companies and a few individuals, the winery managed to make wine consistently with just eight winemakers in that period. Was it the allure of the famed winery, magical people involved in the process or simply good luck that made it a place where Jacob Beringer was the first winemaker and his great great great grandson the eighth? I don’t know about you, but I am a romantic. Truly. My take is it was all three and fate to some degree. This was a marriage of name and skill meant to be. While Mark did not set out living his life with the singular goal of making wine, or making wine for Beringer, he found his way back home. He went through seven different interviews with different departments. The process resulted in him walking away not only with the knowledge that this was a good fit, but he would also have the ability to be successful there. He also felt he had earned his way. “I felt, I finally had the resumé to walk in the doors and do this”, Mark said, reflecting on his journey.

It’s an auspicious rebirth of a Beringer on the 140th anniversary of his great great grandfather’s beginning.

When his children were little, he, as a single dad, showed them how hard he worked. “I had to go out and find my own way in this business. The thing I always want to teach my girls is nothing comes for free.”, Mark reflected. “When they were little I had a DVD player in the back of the car and would throw a movie on when we headed to the vineyards. They were out there with me tasting grapes.” We are now standing in the caves. The extensive caves were originally dug by hand by Chinese immigrants with pick and shovel and carried the dirt out with wicker baskets. It’s crisp and well lit, the temperature perfect for storing wine particularly in the 1800’s when refrigeration wasn’t a possibility. I’m marveling at the experience. The history is staggering, the wine, beyond compare. It’s an auspicious rebirth of a Beringer on the 140th anniversary of his great great grandfather’s beginning of Beringer.

“That’s the thing that I’ve always been curious about is what drove him to come here.”

I ask Mark Beringer how he intends to leave his imprint. “I don’t know yet. I’m still learning where the light switches are.” And on to Jacob Beringer, his ancestor, “If you could speak to him right now, what would you say to him?” He takes a moment, “I think the main thing that’s always come to my mind is what gave him the vision to come here. What was it about this area, this area was nothing back then. It was some stone and stuff like that used as pasture land. A lot of cattle. It was the Wild West and entirely novel. That’s the thing that I’ve always been curious about is what drove him to come here. To have the vision to do wine here was such a good thing. He was a real pioneer in that sense.”

Mark reflects on his last 31 years in the business and how he stays fired up, “The great thing about winemaking is every day is different. I could be in tastings doing gradings of wine or working in the vineyards. We’re also doing a tasting and blending and getting ready to open up the tanks, so that come fall, there’s someplace to put that new vintage.”

The eighth winemaker in 140 years of a continuously running winery is already legendary in name as the Beringer name is in winemaking. Combining the two is the beginning of an auspicious era…

Error: There is no connected account for the user kellymitchell.