It was 2001 and Delia Viader’s 1997 vintage of  VIADER, the winery’s flagship red blend would be singled out as California’s sole wine to make it in to the top 10 of the top 100 list. 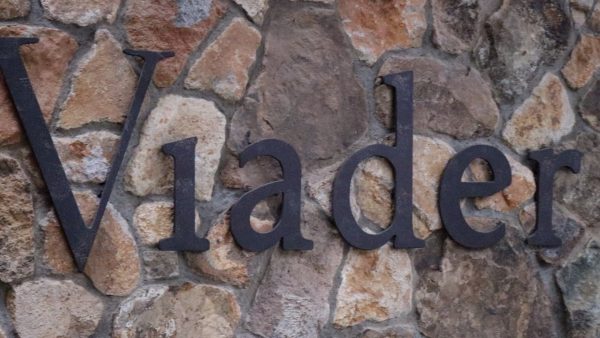 On Breaking Blends:
She put 40% of Cabernet Franc in her Cabernet Sauvignon and received immediate pushback from other winemakers in the Valley. Shocked, they asked her why she was putting that “bastard grape” in the Cabernet. She saw it completely different. Her love for Cabernet Franc came from its beautiful elegance, the aromatic fragrance, and its exquisite feminine touch. The tiny berries produced from the Cabernet Franc would be a challenge to grow and harvest. They’re fickle in their own right. The different dimensions it provided her blends was worth it. “It’s artistic. You cannot be bound by norms. What I do in the cellar is take the nicest, brightest, juiciest parts and put them in the bottle.” she explained.
What she celebrates the most about her life on the vineyard?
The ability to have her family with her… she’s built a dynasty of sorts. Her family is always supporting her. The rewards are tremendous because she sees this as a way of creating something 100% on her own. She also recognizes that this life is not for everyone including her children. To have her children decide to go into the business gave her validation that what she’s built has merit. They see that value as well.
Advice on living your best life.
“Never give up on your dream. Never be fearful, If you want it, go for it. It’s your life. No one can tell you hot to live your life. Don’t listen to the criticisms and silly double talk.” Delia Viader

Winemaker and son, Alan Viader remembers when they came to look at the future home of Viader Vineyards back in the 1980’s.  They were traveling along a dirt road which was bottoming out here and there. His mother, Delia, turns to him and says, ” This is going to be a vineyard. I am going to make wine and this is going to be our legacy.”  Alan recalls tasting grapes when he was eight years old in their vineyards.  At 18 he was picking grape samples and tasting the nuances of the grapes.  He learned to discern the different nuances from one lot to another.

Alan started managing the vineyards in 2002. He’s studied viticulture in Bordeaux France and traveled the globe to important wine regions to learn new techniques and processes of winemaking and sustainable, organic and biodynamic processes. His intimate knowledge of the vineyards has been instrumental in today’s winemaking process at Viader. Now he’s engaged full time in winemaking. His favorite part is creating wine. He’s an artisan as well, but his true art is in the winemaking.
Visit:
Viader.com
1120 Deerpark Road
By Appointment